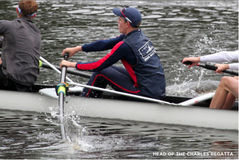 When we see it we marvel about it:

When a rower applies power against the footboard and engages the body in moving the boat, the oar bends, because the force of the oarlock pushes in opposing direction to the force on the handle and the force on the blade.  This bending is similar to a bow, where the hand holding the bow works like the oarlock.

As rowers, we have the choice what type of stiffness we want our oars to have.  It is not unusual to hear around the regatta course that a softer shaft is gentler on the body, because the oar is then more forgiving at the catch…. Forgiving at the catch? I won’t answer this question in this blog post, but that type of reasoning makes me wonder about coaching logic.  Oddly enough, the oar bends the most in the most powerful part of the rowing stroke, half way down the leg drive, which also happens to be the most powerful body position in the rowing stroke…..  This begs the question: Why do we need the oar to bend the most when the rower’s body can actually handle the resistance easily at that drive angle…  I will leave this last statement up to you to discuss amongst yourselves. Needless to say, oar stiffness has been on my mind since I competed at the world championships and Olympics.

From tulips, to hatchets, to smoothies, and Fat2 blades…..  Clearly, if the shaft is longer, then the blade can be smaller at the other end and the reverse is true, the shorter the shaft, the larger the blade size.  It is crucial to fit rowers with the right oar length.  Tall rowers, can handle longer oars because their overall stroke length and CATCH ANGLE….  Shorter rowers can not achieve the same catch angle with such “longer oars”.  Therefore shorter rowers should be fitted with shorter oars.  As mentioned a couple sentences earlier, blade size becomes an important factor in fitting rowers with the right oar length and blade size.

Rigging is a highly underused tool for competitive rowing. Think about it, for the last 100 years, we may have moved the oarlocks at most 5 centimeters on either side of each rigger. The most drastic change is oar length and blade size…..  Oar manufacturers and scientist are toying with oar length and shaft width and they are right to do so.  Just because a rower has the world record on the ergometer, that should not make you jump to the conclusion that the rigging used my such a beast is “hard”.  Rigging an eight or a sculling boat depends on the size of EACH rower.  Once size does not fit all, and that includes team boats!

If an oar bends, does it move the boat?  Answer: no.  Counter argument, the oar flexes at first and then straightens out….  The problem is that it straightens out because the tension can not be maintained by the rower….  So then, the oar straightens out at the end of the stroke, which leaves the smallest muscle groups of the body to deal with oar’s de-flexing… at a point of the stroke where most rowers tend to allow the exit the blade from the water…

I help rowers and crews choose their oars.  I hope you enjoyed this blog post and that it motivates you to think about which oar size may work better for you and your team.  Good luck with winter training.  Xeno 949-400-7630; email: [email protected]

New Look! I hope you will enjoy the remodeled website as much as I...

END_OF_DOCUMENT_TOKEN_TO_BE_REPLACED

Are you looking to row to stay happy and healthy? Row with me!

Do you want to row? Would you like to row more? Do you need...