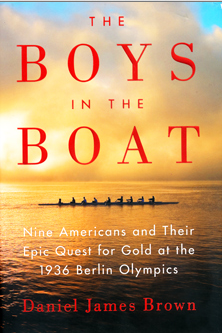 I loved listening to the book The Boys in the Boat, by Daniel James Brown.

It is the story of young men who met at the University of Washington and became the most dominant crew at the 1936 Olympics.

Daniel James Brown did a wonderful job describing every scene in the book.  As I listened to the story, I became an eye witness, an incredible feeling of time travel.  Several times during the book I teared up, sometimes for sadness, and other times for joy and the rage of winning.

In every chapter, I was able to relate as athlete and as coach.  The “Boy’s Boat,” the Husky Clipper, hangs on display at the University of Washington’s boathouse.  There are forces in me that make me want to pilgrim to U.W. and pay homage to the men I got to meet thanks to the great work Daniel James Brown authored.

The footage below is from the race and some of the scenes were staged the day after.  The German commentary is the original.   The US eight is the one closest to the grandstand at the end of the footage.  The lane assignment was a fiasco that tore at my heart for its injustice that was committed by German regatta officials with Nazi ties and the then Swiss International Rowing Federation President (whom I would have liked to drag head first through the water for a  hundred meters, figuratively speaking of course.)

Below is the official trailer for the book: Boys in the Boat 🙂

Below, Daniel James Brown speaking about the book.

I wish you all a great read or listen!

New Look! I hope you will enjoy the remodeled website as much as I...

END_OF_DOCUMENT_TOKEN_TO_BE_REPLACED

Are you looking to row to stay happy and healthy? Row with me!

Do you want to row? Would you like to row more? Do you need...